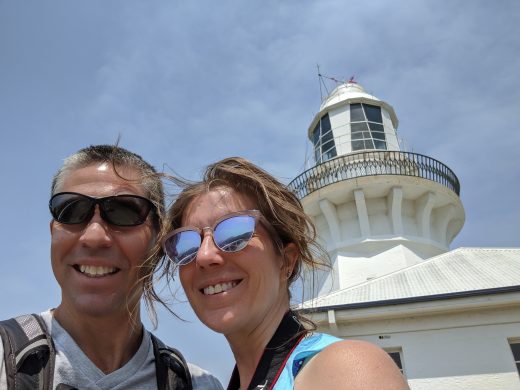 Our time in Port Macquarie has come to a close. Over the last two weeks we finished up some final touches on the holiday apartment, rented mountain bikes, checked out South West Rocks, ate some amazing seafood, and stayed in a couple days because of air quality from the wildfires in the area.

Mountain Biking:
Eric was in seventh heaven two weeks ago because we were able to finally rent mountain bikes. There are a lot of beautiful trails in the area, ranging from crushed rock to true single track. We checked out Lakes Innes Nature Reserve, Wayne Richards Park, and Jolly Nose mountain bike park in the Queens Lake state conservation area. Lake Innes and Wayne Richards were good warm-up trails to acquaint ourselves with our rented bikes. Jolly Nose was an impressive 50+ km collection of single track that weaved its way through thick jungle-like terrain. The park has a huge array of easy to difficult trails, which we mainly stuck to the easy trails for my benefit. The easier trails did offer some technical features for Eric to try though (with a “B” route for me to bypass).

South West Rocks:
South West Rocks is a tiny coastal town north of Port Macquarie, on the edge of Arakoon National Park. We had a coffee and a snack to enjoy the view here, checked out the visitor‘s center, art/craft center, and the smooth, rocky descent to the water. In Arakoon National Park, we visited the lighthouse and the Trial Bay Gaol (jail). A historic site, the jail opened in 1886 for criminals, then was used to house German internees during WWI. The lighthouse was a steep hike up to a breathtaking view of the coastline. I had the grand plan that we’d have a picnic that day, but it was so windy, that we couldn’t find a spot where we wouldn’t blow away.

Wildfires:
After the big wind on the day we went to South West Rocks, several wildfires popped up in the Port Macquarie vicinity. One specifically was in the Lake Innes Nature Reserve where we had biked just a few days before. It was easy to see from the thick growth and dry brush, that once a fire takes hold, it can quickly get out of control. We were close to the water, so we kept getting buzzed by a seaplane going out to pick up water to take back to drop on the fires. Watching the news was heartbreaking, they were fearful they’ve lost some 350 koalas living in the nature reserve. Homes and businesses were also in danger, but they did a good job of at least managing where the blaze headed. The smoke from the fires affected a large portion of the east coast – Sydney had air quality warnings from the smoke drifting down from the Port Macquarie area.

Finals Days in Port Macquarie:
On our last two days in Port, it was super smoky outside. We decided to stay in and Eric got his paint on. We had picked up some framed canvasses and Eric created some paintings to help decorate our friend’s holiday apartment. I am constantly amazed by his talent!

Up Next:
We’re back in Tamworth to spend a couple days with our friends again. In the coming week we’ll be attending the horse races there on Melbourne Cup day, then we’ll be off on another drive further up the coast to Surfer’s Paradise.