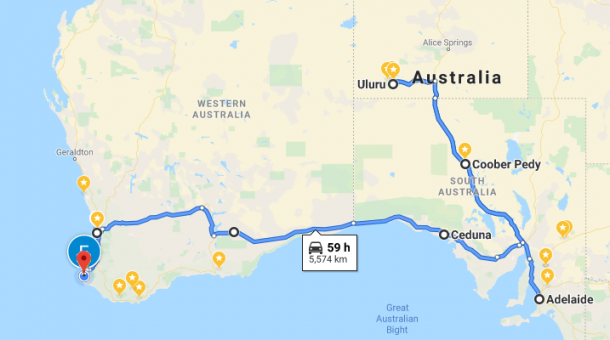 Wow, we’ve driven a lot of km’s so far! Around 5,600 hundred at this point since leaving our friends at the Adelaide airport (that’s 3,480 miles roughly). So. Much. Driving. But, the road trip route has really afforded us the opportunity to see A LOT along the way. Is it the cheaper route? Probably not, but we’ve had a lot of interesting experiences, and seen things we never would’ve seen had we just decided to fly out to Perth from Tamworth. Here are some of the highlights:

Coober Pedy is a town known for a few things – Opal mining, being VERY hot, and underground living. It was always a place that I had been interested in visiting, mainly because of the “underground” aspect, but had we not been going to Uluru (Ayers Rock), we would never have gone so far out of our way to visit. I think I was envisioning we’d be driving into Fraggle Rock – and on first impression as we drove in to town, I was surprised and a little disappointed at how much was actually above ground. We later learned that for what you see above ground there‘s at least twice that amount below ground. Regarding the heat, we lucked out while there the first go around because they were having a cool front move through, so we were able to camp for two nights. Coober Pedy is a very expensive place to stay otherwise, because of the curiosity of the underground nature of the town, in addition to the opal mining, so it is a bit of a tourist attraction in general. The owner of the campground we stayed at took us on a morning tour, showing off some of the highlights of town, even taking us in to his own “dugout” home. Some of the homes there are built in the spent opal mines, others are just dug out straight into the sandstone hills. Since Coober Pedy does get so hot in the summer, the dugout homes stay at pretty even temperatures year round, making it a more comfortable and cost effective way to live.

Our next stop was the sacred aboriginal site of Uluru (ooo-loo-roo), also know as Ayers Rock. This took us up into the Northern Territory state of Australia. It is really out in the middle of nowhere. From Coober Pedy to Uluru, we drove for almost eight hours and the only things along the way were the dog fence, a few road houses, lots of road-kill roos, cows, red dirt, abandoned stripped down cars, and a faux-Uluru. Faux-Uluru was actually Mt Connor – I was sleeping and Eric thought we were closer than we were, so he woke me up to take pictures, then found out at the next lookout stop that we were NOWHERE. Near. Uluru. OMG, so much driving.

From a distance, looking at Uluru, I was thinking, “oh man, this is just a big rock! I hope we don’t regret this drive!”. But visiting the site was awe-inspiring and I can see why the aboriginal people hold it in such regard. While in the Uluru area, we did the 10K hike around the base to take in the beauty of the rock, visited the aboriginal cultural center to learn more about aboriginal history, checked out Kata Tjuta (which is also known as The Olgas, another connected rock formation), the Field of Lights (night art installation), took in a spectacular sunset, and drove out to investigate The Great Central Road/The Outback Way.

We only spent two nights at Uluru because of the heat – Eric was melting. The heat (and the condition of the Great Central Road) is what also shaped our route for where we went next. The Great Central Road, now part of “The Outback Way”, is what Aussie’s call the country’s longest shortcut. It stretches from Uluru right across the center of the country, through the desert, what you‘d think a shortcut would be. It is unpaved, and sometimes maintained. Our original plan was to take this “shortcut” across to Perth. To drive across the Outback Way, you have to get (free) permits to drive through the aboriginal lands. I’m guessing part of the reason you need permits is so they know who is out there and when, so they can keep an eye out for you. During the summer, it seems like it would be very unforgivable. In the end, we decided against taking this route for several reasons: 1) The corrugations – it’s an unpaved road and they run a motor grader over it sometimes. I couldn’t find any information anywhere to tell me the current road conditions – it‘s summer and tourism is low since it‘s so hot, so I don‘t think they‘re running the maintainer much. The little bit we did drive on on, the washboard was so bad, we were driving 40 km per hour and wanted to drive slower, so three days of that would’ve made us crazy. 2) Recommendations – everything we read said that to be prepared to take the Great Central Road, you’d want at least two spare tires, tire repair kit, lots of water, spare fuel jugs, satellite phone, etc., etc. Not really interested in buying those things… and 3) the heat – if anything went wrong with the vehicle, we could’ve been waiting for hours for someone to come by for help. It’s the desert, very sparsely populated, and they were going through a heat wave in the summer…..no thanks.

I was a little disappointed by not taking the “shortcut”, but value our safety above anything else. The ironic part about the decision that validated it for us a couple nights later, we saw a news story about some tourists that had died in the outback because they weren’t prepared for the conditions. I’m all for adventure, but I’m too old to not be logical about things. Soooo….our drive took us back the way we came, the long route, down through Coober Pedy. This time around, because of the heat, we decided to throw down and stay at the Comfort Inn (fancy, right?). The cool part about this Comfort Inn was that it was a dug-out motel, completely underground – I was pumped! It didn’t disappoint either. So quiet, so cool. Best sleep of the trip so far I think.
The next three days we made a really hard push to get to the west coast, driving eight hours, eleven hours, and another eight hours respectively. Not ideal, but we thought we’d pay attention on the way out and take our time on the way back, since we’d be driving the same highway for the most part through the center on the southern coast. Some notable things along the way: Ceduna has some characters, well meaning, but funny in a Wolf Creek sort of way (if you haven’t seen that movie, DO NOT watch it before coming here.) Road Houses are your friend, an oasis in the middle of nowhere for food, bathrooms, random “big things”, campgrounds and motel rooms. We didn’t stay in any on the way out, but may have to on the way back because of the 2 1/2 hour time change once you hit the Western Australia state line. (!?!?) Fraser Range Station was night two of our crazy three day driving bonanza, and probably my favorite camp site of all thus far. It wasn’t fancy by any means, more of a farm setting in the rolling hills, with starry skies, and a fantastic lamb roast dinner.

We arrived in the Perth area on December 9th and decided to stay in an AirBnB because of the forecasted heat. We have unfortunately come to Australia while they are having record breaking occurrences of heat, drought, and fires…..We technically stayed in Fremantle, which is more of the original settlement area on the west coast. Steeped in history, we did a tour of the Fremantle Prison and learned a lot about the beginning days of the area. Really, anywhere we’ve been that they’ve talked about Aussie history, it’s been so interesting how it connects with American history, just fun to see how the countries have intersected over time. Other than that tour, we basically wandered the city to check things out. A lot of really beautiful architecture remaining or being restored from the settlement of the area.
While in Fremantle, we took a ferry over to Rottnest Island. Rottnest is Dutch for rat’s nest, and gets it name because the island is inhabited by a huge population of marsupials called quokkas. We rented bikes and took a 30 km ride around the island to take in the stunning beaches, and to make friends with the cute little quokkas. Quokkas have gained some fame lately, because they always appear to be smiling, and because they are curious and unafraid of people since there are no predators on the island. We found one chilling under a tree on the far side of the island and made friends with the little guy. Side note, despite being so darn cute and photogenic – in areas where there are prey, quokkas are known to throw their offspring at predators to escape……
From Fremantle, we headed to Margaret River. Margaret River is known for being another great wine region of Australia. It is a much lesser populated area, and provided a more relaxing, slower pace for a few days for us. Since it was so hot still, we stayed in a cabin at one of the campgrounds. We toodled around town a bit, checked out a couple wineries, the beach, Hamelin Bay, and the rocky coast down at Leeuwin Light House – a point where the Indian Ocean meets the Southern Ocean. Oh my, the beaches just keep getting better and better (a nice change from the inland desert sands for sure).

We’re slowly making our way back to the eastern portion of Australia now – making stops in coastal towns of Denmark, Albany, and Esperance, before we tackle the long drive on the Eyre Highway again. Not really looking forward to the truck trains and long spans of nothing, but hey, that’s the ONLY route down here back across, so we‘ll make it entertaining. Fun and interesting fact though for fans of golf – the longest golf course in the world (1365 km) is located on the Eyre Highway. There are 18 holes spread across many stops along the highway, and you golf each hole along the way as you go. We didn’t do it, because, well, we don’t golf, and it was 100+ degrees each day and blowing sand…..But, for those of you die hard golfers, it could be a fun bucket list idea. Just remember to pack your sunscreen and buy a fly net.