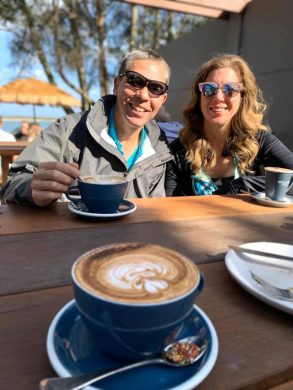 This is a two week blog post – wanted to write something up last week, started, then didn’t want to bore you too much with the details of painting and our trips to Bunnings….
The drive here from Tamworth was a varied landscape of plains into the mountains, across a valley, into the mountains again and then down to the coast. I drove for the first time here, which was a bit easier than I expected, but I purposely mapped my portion of the drive through the outskirts of Tamworth, to the pre-mountain town of Wolcha. Eric, bless his heart, got to drive the exciting hairpin turns of the mountains, while I white knuckled the OS bar from the passenger seat. The hardest things to get used to driving a car on the opposite side of the road are where the blinker arm is, and where to look for the rear-view mirror. We keep hitting the wipers instead of the turn signal, and remembering to look up and left for the rearview mirror is impossible! I will need to get some more practice in, and will probably have plenty chance when we do the great drive to Perth.

Port Macquarie is a sleepy coastal town of about 50,000 people. It’s bustling during the day, but seems to button up early-ish at night. I like it a lot here – it’s a really relaxed place, with good people watching, but not too overwhelmed with tourists.
We spent a good portion of our first week prepping, painting, and helping do some minor updates on our friends’ holiday apartment. In reality, that’s pretty boring, and probably not what you want to read about….doesn’t make for a good travel story, haha. Bunnings though, is basically Home Depot – it has a huge array of products for home improvement just like any of the DIY stores at home, but nothing here is the same as at home, with the exception maybe of liquid nails. With a little trial and error, and asking a lot of questions to the super helpful Bunnings staff, we’ve been able to get all the projects done that we thought needed to be done. We’ve been to Bunnings almost once a day since we’ve been here, and the staff there is probably tiring of us…..

In our “free time” we’ve checked out the coast, the lighthouse, a winery and hedge maze, the “op shops”, did a few bike rides/long walks, and saw sea turtles, kookaburras, flying foxes, pelicans, dolphins, whales, lizards, koalas, etc. So much wildlife! Amanda and her daughter Maddie also came up for our second weekend here to hang out and enjoy the town.

Wildlife:
Even though we are in “the city”, it was a heavy couple of weeks of wildlife sightings. It’s so much fun to be in a place where there so many different types of animals! On our hikes, bike rides, and excursions, we’ve seen flying foxes (massive bats), large lizards, sea turtles, dolphins, whales, pelicans, koalas, and kookaburras (along with the many other birds). The bats were probably the most unnerving. I have seen small bats close up before, but have never seen anything like these! They are referred to as flying foxes, are as big as ravens, and luckily eat pollen, sometimes fruit, if pollen is scarce. They hang from the trees during the day, wrapped in their skin wings, then around dusk they take flight and you can watch streams of them flying inland. The whales, sea turtles, and dolphins were the most surprising to see, mainly because they just pop up out of the water when you least expect them. The cutest animals we saw were the koalas, of course. Haven’t seen them in the wild yet, but we visited the koala hospital here in Port Macquarie. It’s a great outdoor space where they rehab hurt or sick koalas. The koalas are either released back into the wild if they are healthy enough, or kept permanently there in the safe, natural environment if they wouldn’t be able to survive on their own.

Bago Winery & Maze:
We took a drive up into the foothills to check out the Bago winery. On the grounds of the winery is a large hedge maze. Eric, Amanda, Maddie and I wandered for about an hour searching for the scavenger hunt items, found the exit, but had to go back and find the rest of the scavenger items. Once we found them all, proceeded to walk in circles trying to find the exit again. It was a bit maddening, but a fun way to spend the afternoon on a beautiful warm spring day!

Lighthouse:
We stopped by the Tacking Point Lighthouse on our way home from the vineyard. Perched at a high point along the coast in the Port Macquarie area, the lighthouse offers some spectacular views of the ocean and rocky beaches below. This is where we saw the whales surfacing! Luckily we were paying attention to others pointing out at the water and were able to catch a view of their tails splashing. Tried to get pictures, but they were too far out and I was not fast enough.

Op Shops:
Op Shops are second hand stores, stands for “opportunity shops”. Who doesn’t love looking for a good bargain or opportunity? We hit up the Op Shops for some painting clothes and to see what other sweet treasures we could find. I lost track of how many times I said “oh, I wish I could take that with us!” Next time – probably won’t fit in the backpack.

We’ll be here in Port Macquarie for a couple weeks still before we move on.

That’s all for now, until next time!