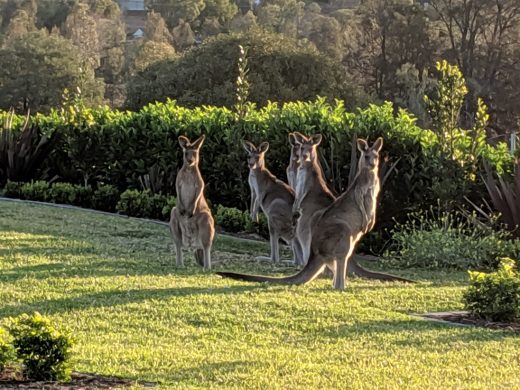 Sunday, October 6, 2019
Time is moving at a very weird pace now that we’ve started our trip. It’s a hair over two weeks that we’ve been gone, but it feels like much longer. The days seem to blend together a little, thank goodness I have a watch that tells me what day it is! So much “free time” is a strange concept considering I used to have a very set routine because the routine kept me focused and relaxed. Day to day right now is “well, what are we doing today?” But, plans are taking shape and we now have a good idea where in Australia we’ll be through the beginning of January at least. What to do day to day is still up in the air, but it’s OK, that’s part of the adventure of exploration!
What have we been up to over the last week? We were able to get a couple more hikes in on Flagstaff mountain, saw (ran away from) our first deadly snake, checked out Sawn Rocks and Mt Kaputar, painted a room, tore down some old outdoor play gear, put together a bike, and went for our first bike ride!
The map below gives you an idea of where Tamworth is in relation to Sydney, and where Sawn Rocks and Mt Kaputar are in relation to Tamworth (starred spots in the upper left).

Snakes! OK, just one snake, a small, brown snake, but deadly! It’s called the eastern brown snake, or the common brown snake, and they can grow up to two meters long! This one was only 10-12 inches, thank goodness. If I see a two meter long snake here, it wouldn’t have to bite me to kill me, I’m sure I’d have a heart attack. I made the mistake of Googling facts about the brown snake and now I’m afraid to go outside, ha! On our hike, Eric noticed the little guy right in the middle of our path. We waited for it to move on, it seemed like hours, but it finally did move enough for us to dart past it. That is the last time we’ll be taking the lesser trafficked hiking trail on Flagstaff!

Sawn Rocks and Mt Kaputar (sounds like cap-you-tar) are rock/ mountain formations pushed up by volcanoes millions of years ago. Sawn Rocks is described to look like organ pipes, which if you’ve seen a pipe organ, you’d probably agree. Mt Kaputar rises up in the middle of plains and is amazing to see from a distance, with an equally amazing view after a drive up the crazy road to the summit. Props to Amanda for not hurtling us off the cliffs on the drive up or down, ha! The mountain has an elevation of 4885 feet above sea level.

Since we are used to doing house projects, and to not feel like we are “doing nothing” or “being lazy”, we helped our friends with a few things around the house this week. We painted a bedroom, tore down some old unused outdoor play equipment, and put together a bike.

Our time in Tamworth is coming to an end for now – we are heading to Port Macquarie in the coming week to explore that area of the coast for a few weeks, then off to the Gold Coast!

Hope you are all well, ’til next week!